Fleur de Lys - Pippin - The end of an era 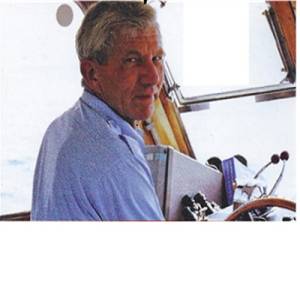 Bobby Archibald at the helm of Pippin

It was the end of an era for a familiar west coast boat when she was motored south to take up a new home in the Thames estuary recently.

Pippin, the 52ft Fleur de Lys motor yacht owned by Bobby Archibald of Benderloch, has been such a well known boat around the Oban area that it has almost become part of the scenery! Certainly there are many postcards of Oban mat feature Pippin off the Esplanade.

Previously owned by another west coast character Angus MacPhail, the 50 year old grand lady was used for chartering and was at one stage Bobby's home in Oban Bay for seven years. Bobby decided to put the boat up for sale in the autumn of last year and things moved swiftly, a post on the internet aroused interest from BoatShed International. Three interested parties were in touch almost immediately and although two were west coast based, the third, from London was successful. After beaching Pippin at Taynuilt to look at her, the journey south was planned and Archie MacDonald of Oban teamed up with Bobby to help the new owners take her south.

The voyage took a fortnight or so with a leisurely motor through the Caledonian Canal and down the east coast. The trip stopped off in Inverness for a couple of nights and similarly in Grimsby before finally entering the Thames and sailing some 43 miles up river encountering three locks in the passing. Bobby said it was an interesting experience passing Kew Gardens and nearly ending up at Heathrow Airport!

Pippin has now been hauled out on an island in the Thames which was previously used for boat building and engineering. The new owner plans to restore her himself over the next three years bringing in expertise as required. He has previously restored a Dunkirk Little Ship. The project will be posted on the internet so west coasters can keep abreast of Pippin's progress.

Bobby said it was a strange feeling saying goodbye to his beloved boat after owning her for 20 years. It had been at a West Highland Yachting Week when racing with Peter MacLeod on Snoopy on the Oban to Tobermory race that he first encountered Pippin.

Snoopy was motoring in by Calve Island when the engine packed in and Peter had called a friend on her boat for assistance. Hearing the radio call Angus MacPhail on Pippin sent his RIB out to tow Snoopy in and tied her alongside Pippin.

The usual west coast hospitality was enjoyed that evening aboard Pippin with a night of music and song. At this stage Bobby was still living in New Zealand and had planned to buy a boat and sail her home. When it became apparent Pippin was for sale he opted to buy her from Angus and based her in Oban Bay and latterly Loch Etive.

The Fleur de Lys range of motor boats were built in Wisbech, near Peterborough and designed by George Jones. The builder, Jim Dagless, was a furniture maker to trade but loved wooden boats so much he started the Dagless Yacht Company of Wisbech.

He built many Fleur de Lys including some up to 98ft LOA although the advent of GRP put an end to his traditional boat building.

The standard of finish in the Fleur de Lys is a tribute to Dagless company craftsmanship and there was no finer saloon as many will remember.

Pippin even boasted a full length bath and Bobby said it was in use many times, although even with a 400 gallon water supply on the boat, he had to be careful not to run out!

Bobby recounts some fantastic and special memories of Pippin, often the life and soul of many Royal Highland Yacht Club musters where the socialising aboard was renowned, complete with dual accordions of Bobby with Peter MacLeod.

The furthest charter Bobby undertook was with Oban Canoe Club to the Outer Hebrides with six canoes strapped to the boat for exploring!

One notable charter for Pippin was when Calum Kennedy, Billy Connolly and actor Ian Cuthbertson wanted to go to St Kilda. Having crossed the Minch and anchored in Lochmaddy they headed to the local hostelry where, the story goes, some of the locals set fire to The Big Yin's beard, the ensuing fracas involving the police saw Kennedy beat a hasty retreat leaving Cuthbertson and Connolly in the middle. However Calum decided to return to calm the situation with an impromptu performance of his greatest Gaelic hits! This completely diffused things and everything returned to normal although it was said The Big Yin trimmed his beard thereafter ...

Pippin was also a familiar sight at West Highland Week under the helm of Angus MacPhail who was chartered by Tennents during their long sponsorship of the event.

The delivery trip to the Thames was the furthest Bobby had sailed her. 'It's been a major part of my life and I have many brilliant and happy memories of my time aboard Pippin, said Bobby adding; The time had come to say goodbye, but I will keep in touch with the new owner and look forward to seeing her restored to her former glory.'