Home to Scotland after 50 years. 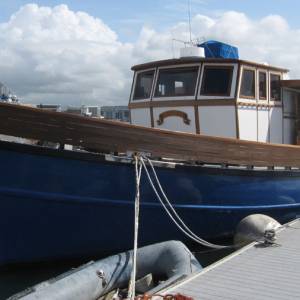 Back in 1946 boat builders J&G Forbes of Sandhaven in Scotland built a sturdy 53’ fishing vessel named Capella. She was taken south to work the fishing grounds off the Devon and Cornish coasts. Many years later she was converted to a SCUBA diving vessel but when the business fell on hard times she was purchased by a new owner in 1994 who fell in love with her and decided to spend the next few years and quite a few pennies restoring and converting her to a lovely live-aboard motor cruiser, now named McAlister.

Wanting to retire to warmer climes, the owner placed her for sale in the hands of local Boatshed Plymouth broker Stephen Grimshaw. Click here for details.

Word soon went round north of the border that a piece of Scottish maritime history was for sale. And so it was that on a cold, grey and wet day in winter 2012 that three hearty Scotsmen ventured south to reclaim this vessel. Wearing their kilts and nothing much else, Mike, Andy and Jock relished the warm southern weather and gave the vessel a thorough examination.

It was apparent that these were real men of the sea who had salt water coursing through their veins and knew more about Gardner engines than Mr. Gardner himself and more about wooden boat building than Noah.

A little while later they retired to cogitate over a wee dram of Scotland’s finest, and decided to buy the vessel. Captain Mike put his hand deep into his sporran and withdrew the required number of gold coins and the deal was done.

At that time there were Force 9 and 10 gales blowing up from the South West but, undaunted they planned to motor their newly acquired boat round Land’s End, north through the Irish Sea and home to Tarbert Harbour, Loch Fyne in Argyle. Like true mariners they correctly picked a weather window in early January and set off on their voyage. It is said that local folk down near The Lizzard heard the sound of bagpipes playing Speed Bonnie Boat drifting over the seas as she motored past. This may be more fancy than fact.

Fifty-two hours later the three intrepid Scotsmen motored McAlister into Tarbert Harbour and tied up alongside the quay. Mission accomplished. She was home in Scottish waters after more than fifty years. Robert the Bruce would be proud.

P.S. Mike, Andy and Jock were last seen heading for The Anchor to celebrate their raid south of the border. 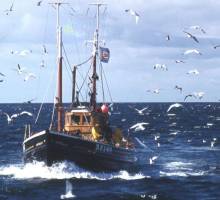