Boatshed Newport
The Loss of the HMS Bounty
Tuesday, 01 January 2013

The Loss of the HMS Bounty 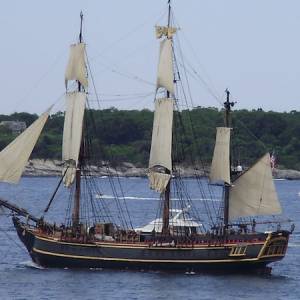 In late October, Hurricane Sandy made her way up the east coast leaving a wake of destruction from the Jersey shore into southern New England. It was a full moon and high tide combined with a cold front that created a so-called super storm. The storm surge was tremendous to all in its path.

The HMS Bounty sank on her final voyage as she sailed south toward Florida off Cape Hatteras North Carolina. Her skipper along with a crew of 15 left New London, Connecticut bound for St. Petersburg, Florida. They planned to sail far enough east so as to avoid the storm but floundered in 18 foot swells when they lost power. They sent out an SOS and set off the EPIRB when the power and bilges failed. All of the crew donned survival suits and all but two made it into two enclosed lifeboats.

Sadly, two crew members including the captain were separated from the lifeboats and did not survive the ordeal. The US Coast Guard recovered the remaining crew with Jayhawk helicopters.
The HMS Bounty was a replica of the original built for the 1962 movie "Mutiny on the Bounty" starring Marlon Brando. She was 180 feet in length and also appeared in the 2006 "Pirates of the Caribbean Dead Man's Chest" starring Johnny Depp. I was fortunate enough to see her this past summer in the Tall Ship Parade of Sails as she left Newport. I took these photos of her in all her glory and it is how I shall remember her.
Boatshed Newport is located in the historical sailing city of Newport, Rhode Island, which is a stop on the Tall Ship route. Our heartfelt condolences go out to the families of the lost crew members. 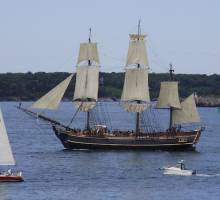 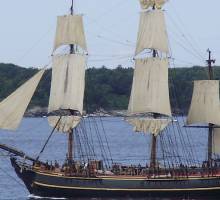